Robert Wood (1717-1771) was an antiquarian, historian, civil servant and politician. Born in Ireland he was educated at Glasgow University and the Middle Temple in London. In 1750-1751 two wealthy Oxford students hired him to accompany them and the Italian draughtsman Giovanni Battista Borra (1713-1770) to explore the ruins of the Troad, the land to the east of the Dardanelles in modern Turkey.  One of the students died early on but the remaining two pressed on through what is now Syria and carefully surveyed and drew the Roman ruins of Palmyra and Baalbek which is now in Lebanon.

They published their observations in 1757 with forty-six plates engraved by Paul Fourdrinier. This book was unusual in that it names no publisher or seller (the title page simply says Printed in London) and Paul is only acknowledged by his imprint on each plate. There was considerable public interest in the Middle East and the author may not have needed to limit his sales to particular outlets.  The book was published in French at the same time, for as Wood explained in the forward to the English edition We consider ourselves to be engaged in the service of the Re-Publick of letters which knows, or ought to know, no distinction of country, nor separate interests. We shall therefore continue to publish our Work, not only in English but also in the language of a neighbouring Kingdom, whose candid judgment of our first production under the disadvantage of a hasty and negligent translation, deserves at least this acknowledgment.  Apparently the French had made their adverse opinion known!

The Italian Borra had accompanied Wood back to England and for a decade was kept busy reproducing images of ruins of the walls and ceilings of the wealthy including at Norfolk House in London for the Duchess of Norfolk and at Stowe for the 2nd Earl Temple. Type your paragraph here. 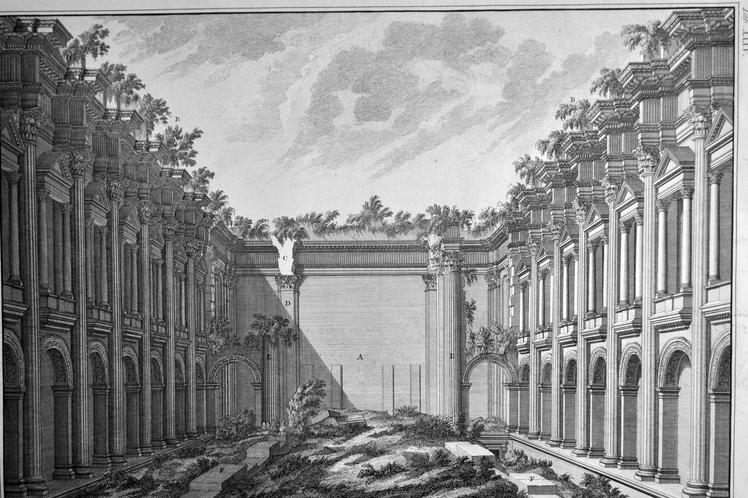 Detail of the Ruins by Fourdrinier after Borra. Author's Collection