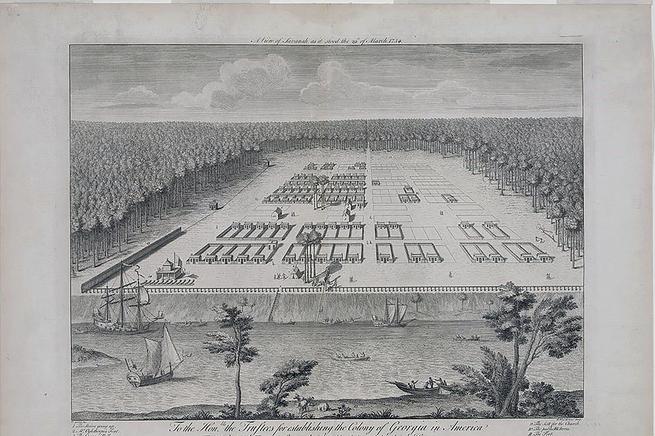 In today’s markets Paul Fourdrinier engravings mostly sell online for a few tens of dollars, a few hundreds if special, a thousand or two for the very rare and larger pieces. Yet one rare engraving has sold for tens of thousands of dollars; his large Sketch of the Colony at Savannah, Georgia of 1734. The value does not come from the piece being a Fourdrinier engraving but from the subject matter; this is the earliest depiction of this historically important colony.

The site chosen for this new model colony was Savannah in Georgia, site of the historic present day city. The Province of Georgia was chartered by George II in April 1732 and was named for him. At that time, it extended west to the Mississippi River.

In 1732 the Trustees of the Colony in London ordered a sketch of the colony to be engraved and published and this important work was engraved by Paul Fourdrinier. The identity of the original artist is disputed and the full story is told in the book The Forgotten Fourdrinier