Paul Fourdrinier was a Huguenot copper intaglio engraver, born in The Netherlands and emigrated to London in 1720 who for 38 years produced engravings for some of the most prominent people and projects in England. Almost completely forgotten by history he is celebrated here and in his biography shortly to be published.

Paul was probably apprenticed to Bernard Picart, one of the greatest engravers of his age. When he came to London this enabled him to work for Jacob Tonson, a prominent publisher. His first assignment was to produce engravings for John Dryden's translation of The Works of Virgil. From there he was onwards and upwards as we will describe as this site grows 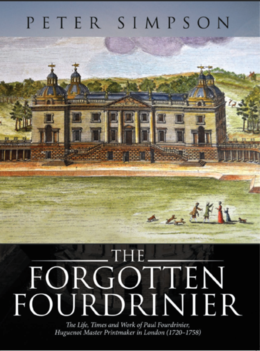 The Life, Times and Work of Paul Fourdrinier

Huguenots were French Protestants who fled or were deported from France, mostly after the Revocation of the Edict of Nantes in 1685 which led to a return of persecution of non-Catholics. They went mainly to The Netherlands, England and ultimately the United States. Being free thinkers they were entrepreneurs and artisans with creative and business skills

What is this about?